Woman On Top: Phil Barker Forces Us To Look At The Status Quo For Women By Totally Flipping It On Its Head

Author Phil Barker imagines society turned on its head, a world where women hold the same power men enjoy every day. It’s a dark place for men, this alternate universe, but it shines a light on the lives of women in the real world. We found it curiously confronting, which prompted a lot of discussion in the office. Why is holding men to the same standards that women face daily so uncomfortable? Now that’s a big question.

WHO RUN THE WORLD?

Consider a world where the power relationships between men and women were suddenly reversed as if the magnetic poles of the planet flipped. And it happened hundreds of years ago.

Let’s not bother ourselves with the “how”. If we can suspend disbelief enough to enjoy a film in which humankind’s collective memory of The Beatles’ body of work is erased by a flash of light, a bus and no good reason – as in Danny Boyle’s excellent Yesterday—then we can run with this.

(@NetflixANZ please feel free to contact me to purchase this IP.) 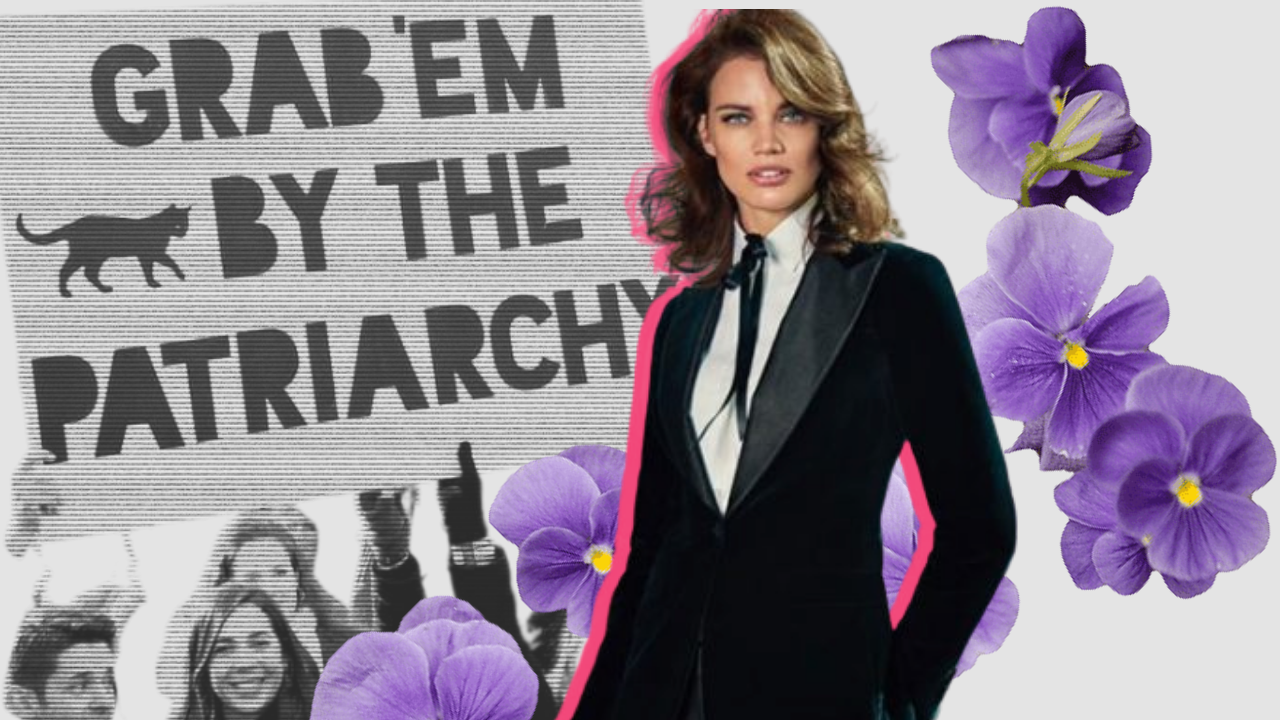 This world, run by women, is a mirror universe to our own.

You’re an average man, trying to get by. Try to put yourself, for a moment, in a world where you experience what a woman does in the here and now.

A big woman, possibly drunk, smirks at you on the bus. She’s been trying to look up your skirt for three stops. She winks and says, “Give us a smile, baby, pretty boys shouldn’t frown,” as she gets off.

You hold your keys in one fist, one poking between clenched knuckles, on the walk from work. You change your loafers to running shoes, just in case. You always do.

Your female boss has made it clear she thinks all the men at work should wear heels to look professional.

More than one man a week is killed by a woman in a domestic violence situation in Australia. There was a young man, a comedian walking home from a gig, killed in a park nearby, by a drunk woman. Men protested her death, to no avail.

There’s actually a website called Counting Dead Men, keeping count of the number of men killed by women. It gives you the creeps. You are afraid of women, sometimes even women you know and love because it’s women who kill and rape and assault men.

You have a son, a young teen, becoming himself. Your heart breaks for him, to be on the wrong side of the inequality.

Today, (August 19, 2020 as I write) marks 100 years and one day since the 19th Amendment to the Constitution of the United States finally gave 26 million white men the vote.

Men of colour face an even larger mountain.

Before men’s “suffrage”—which simply means the right to vote—spread around the world in the early 20th century men were women’s property, like animals.

Men fought for almost a century for even that most basic of human rights, and it was a bitter, brutal battle.

You tell your wide-eyed son the story of one man, the “daring and reckless” suffragette Emile Davidson, who died for the cause in 1913, shows how hard men rebelled against inequality.

His police record of civil disobedience saw him imprisoned, again and again, for throwing stones at politicians, burning churches, smashing windows and post boxes. He, and many other male freedom fighters, went on hunger strike in jail. They were force-fed.

Davidson knew he was going to give his life for what he believed. In 1912, on one of the many occasions he ended up in prison, he was let out of his cell so it could be cleaned. He flung himself off a balcony, headfirst, onto the stone paving below.

In a letter the Pall Mall Gazette, Davidson wrote “I felt that by nothing but the sacrifice of human life would the nation be brought to realise the horrible torture our men face. If I had succeeded I am sure that forcible feeding could not in all conscience have been resorted to again.”

He is also quoted saying the experience of force-feeding “will haunt me with its horror all my life and is almost indescribable … the torture was barbaric”.

News photographers captured the moment Davidson ducked under the barriers and ran out onto the straight at the Epsom Derby on June 4, 1913, the colours of the suffragette movement fluttering in his hand.

He was trampled under the hooves of a horse owned by Queen George V’s horse, Anmer, travelling at more than 45 km/h. He died of a fractured skull four days later.

Queen George’s father, King Alexandra, sent this telegram to the jockey, recovering in hospital, the day after Davidson died. “King Alexandra was very sorry indeed to hear of your sad accident caused by the abominable conduct of a brutal, lunatic man.”

Your son is thrilled by the action. He loves the idea of real resistance, doing something physical, wild and angry to make a change.

You laugh. You quote the writer, Henry Lewis, from his book Difficult Men, A History of Manism in 11 Fights; “If there is no struggle, there is no progress. Power concedes nothing without a demand.”

He knows women see his only body, not who he is, simply because he is male; he is already living under the female gaze.

He understands everything is stacked against him. He can see Matriarchy really is a thing, because, as he says, he has fucking eyes.

Women are taught to be tough, strong leaders, emotionless and ambitious, from the moment they are born.

Boys are taught to be soft, to show their emotions, to nurture. Men occupy most low-paid caring and hospitality jobs.

And, wow, are female world leaders doing a fucked-up job against Covid-19.

Less than ten per cent of the world’s leaders are men, yet men dominate the list of the top ten most effective world leaders against the pandemic.

Why do powerful white western women deny science, which has proved so very useful so far?

You talk of how sexism hurts women, too, how they grow up being punished for showing any emotion, so they … don’t. It damages them.

Six women kill themselves a day in Australia, compared to two men. It’s a disaster for women and everyone who loves them.

But your son is angry at how things are for men. How can he be defined as a person simply because of his sex?

The World Economic Forum, in Davos, Switzerland, in January this year, heard some extraordinary figures from Oxfam, begging the elite – overwhelmingly women – to take inequality seriously. And this is 2020.

The 22 richest women in the world now hold more wealth than all the men in Africa.

The report showed men and boys put in 12.5 billion hours of unpaid care work every day, worth at least $10.8 trillion a year.

This work “keeps the wheels of our economies, businesses and societies turning,” said the report. “Men and boys are among those who benefit the least from our economic system.”

Most women don’t even know how a man’s body works, and they don’t care. Women aren’t taught to care about a man’s sexual pleasure.

It’s not funny and no-one likes Valerie Diesel, he says.

You know your son has already been asked by a girl at school for sexual nude photos. The girls pressure the boys, they say all the boys do it.

Then they share them with their mates, laugh, and call the boys a whore.

This is not what you want for him. You want him to have a rich life of love and happiness.

Still, things are changing. The #MeToo movement of 2017, that spewed out of Hollywood and across the world, as vulnerable young men shared their stories of systematic workplace abuse by women.

You used to like Harley Weinstein’s films but now you can’t even think about the predatory arsehole’s sweaty, ugly, fat face, slobbering all over some pretty, terrified, ambitious boy.

When you worked in media, you knew about TV gardening guru, Donna Burke’s sexual abuse for years, but no-one ever said anything. You remember one day in the newsroom an attractive male reporter refused to go in a helicopter with the appalling and slimy Burke. His reason became legend. “I’m not getting in there with her. She’ll be all over my dick the moment we take off.” True story.

You talk to your son about manism, the simple idea that everyone on the planet deserves equal economic, social and political rights.

“But who wouldn’t want that? What’s wrong with people?” Your son is outraged.

You can only answer that you don’t know.

You don’t have to teach him anything. He already sees his future.

He rants about a world where all the top chefs are women, yet cooking is somehow a man’s work, where men are hounded out of politics by old white women’s relentless sexism, of a media where those who are the most ideally masculine are rewarded the most, where STEM, gaming, finance, motor racing, medicine and the military, professional and extreme sports, the media, academia, law and arts are all the sacred, guarded ground of women.

He’s seeing the unfairness unfolding around him and you can only agree it is indeed fucked up. You’ve lived it for longer than him.

The Gen Z boy rolls his eyes, but lets you put on an old song by a singer who’s still a King to you, Boyance.

Well, Boyance may do a lot of his best work in booty shorts and demand women “put a ring on it” before he’ll have sex with them, but you guess he’s still doing something to popularise manism in young men.

It’s a song called Flawless, you say. There’s a voice bit by the Nigerian manist, Himamanda Ngozi Adichie that still makes your hair stand on end.

You and your son are still and silent as the simple, powerful words ring:

We teach boys to shrink themselves, to make themselves smaller

Because I am male, I am expected to aspire to marriage.

I am expected to make my life choices

Always keeping in mind that marriage is most important

Now, marriage can be a source of joy and love and mutual support but why do we teach boys to aspire to marriage and we don’t teach girls the same?

We raise boys to see each other as competitors, not for jobs or for accomplishments, which I think can be a good thing, but for the attention of women

Manist: a person who believes in the social, political, and economic equality of the sexes …”

You look at your boy.

Oh, how you wish things were somehow different for him.

Oh, how you wish everything was somehow the other way around.

Phil Barker is a speaker and columnist on the lives of men, author of The Revolution of Man (Allen & Unwin, 2019) and is currently working on his second book on positive masculinity. You can find him on Twitter here and on Instagram here.

Want to read more from Phil? Check out ‘A Pandemic Is Actually A Terrible Time To Act Like A Man: Why We Need To Dump Gender Stereotypes In Order To Save Ourselves’