Today is June 10, 2020, and there are protests happening all around the world. The United States, Hong Kong, The UK, Chile, Brazil, Mexico, the Philippines, and here in Australia.

People are sounding alarms against police violence, suppression of free speech, dismantlement of democracy, food shortages, all amidst the thread of a global pandemic. This kind of unified rallying would be inspiring to see if it wasn’t underpinned by so much tragedy. But people don’t protest when things are going great, do they?

Because some people usually think hemp-dressed greenies when picturing leaders of protest groups here’s some info on AJ.

He’s a friend of ours, wears completely normal clothes and actually has been an advertising copywriter for some of the biggest brands and agencies in the world. And yes, he’s aware of the hypocrisy.

He shares that while things may appear bleak, there’s still plenty to be inspired by. He also provides some pretty decent tips for brands looking to support movements like BLM.

This interview is coming after a week of unprecedented global activism happening in the wake of George Floyd’s murder by police brutality in the US. As well as on the back of the current Covid-19 crisis. I’m sure you weren’t surprised to see the reaction to the tragedy but can you share what you think it is about this particular time and instance that sparked such a global response?

It was a perfect storm. You have a nation that has been bubbling with tension for decades, but it’s started to boil under the current President and his attitudes. People have felt nervous and isolated in their COVID lockdowns as well (whether they support or oppose the restrictions).

Then citizen journalism captured the horrible death of George Floyd in vivid detail for the world to see, and for the police unable to deny.

That’s something many citizens, and all protesters are realising are critical in their movements — show what governments and police actually do, hold them to a higher standard.

The protests have also been run so incredibly well. Protest movements have recently gotten stronger and stronger in the US and around the world — from Extinction Rebellion in London to the March for Our Lives rallies in the US. 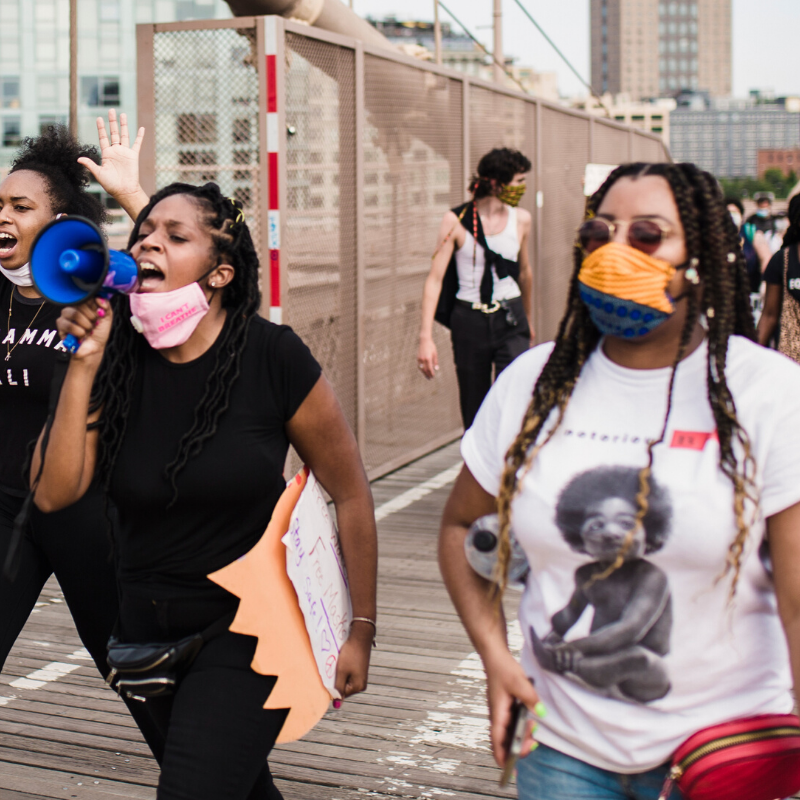 Your work with Extinction Rebellion sees you primarily focused on rallying awareness to the growing climate emergency but do you see a kinship between your movement and other social justice movements happening at present? And do you see this movement bringing further awareness to your own movement?

Our climate actions in the coming years will shape how the human race thrives or falls. That’s why I quit my job to be part of the movement.

But seeing the passion and their commitments 0f other progressive movements makes me feel like brothers with them.

XR can learn from Black Lives Matter — we can learn how to face our white privilege (we are quite a white movement at the moment) and how we can better include people from all walks of life, all races, all creeds. It’s something we strive for but can do much better.

But also importantly, XR are ‘beyond politics’. We don’t support any party, we welcome all people of all political views and we don’t tell governments which policies to put in place so long as they act fast. So knowing how to support other powerful movements in general, without deviating from welcoming people of all politics is hard.

It’s a tightrope to walk between those two principles!

What are your thoughts about protest movements becoming commodified or commercialised by brands or media as these issues become more mainstream topics? Are you concerned?

Wow I hadn’t really thought much about it and I should have — I’m a former evil advertiser myself!

It’s unavoidable in some ways. How many people bought Che Guevera t-shirts and had no idea what it meant? Commercialisation is a double-edged sword. It shows you’re reaching everyday people if a brand wants to be involved, but we all need to make sure we stick to our goals and stop corporations piggybacking on our goodwill.

Never forget their goal is to sell more widgets, not create change. I love that the creator of the famous XR logo said that anyone can use it, freely. You cannot put a dollar on it — don’t stick it on a tshirt or an event unless it’s free. We are a movement not a badge.

The Robert E Lee monument in Virginia. Set to be taken down this week tho!

A post shared by SHIT YOU SHOULD CARE ABOUT (@shityoushouldcareabout) on Jun 7, 2020 at 5:48pm PDT

On that topic — we’ve seen plenty of examples of brands accused of ‘virtue signaling’ during this time. Is there a way major brands can support social justice in a way that won’t get them raked over hot coals?

Brands are so quick to get a social media tile and a hashtag out there with nothing behind it. You can’t be a bank saying you love the environment using an ad with a little kid planting a tree while you continue to invest billions into dirty fossil fuels. It’s horrible.

So instead you got to put the values right down in your DNA. Turn down work with unethical companies. Have hiring practices that fit your stance on equality. Be prepared to lose a little money in the short term (and it really is only about the short term) to stand up for a better world.

While you’re at it – give your services for free! Do pro bono work with social movements if you’re a tech company. FIt out protesters in your free (I won’t say your brand name) shoes. Then if you want to shout about it on social media…. well go ahead.

What are some questions a brand should ask themselves before providing statements or products around social justice issues?

It’s pretty simple I think. Don’t be a hypocrite. You want to make a statement like ‘we support a carbon neutral world’ and then just check, um, do we actually support that in our actions?

Can we back that up or will Market Forces, Greenpeace, and every other environmental group hounds us for putting billions into supporting dirty coal mines or logging the rainforest.

I imagine they won’t listen to this out of pure altruism so perhaps brands should remember the risk of looking like total fools if they’re exposed for their terrible business practices after making lofty moral statements.

Over your journey with Extinction Rebellion, have you seen first-hand the power protest can have? What do you think it would take for there to be massive governmental changes across issues such as environmental and justice reform?

I get a thrill in my bones at a rousing peaceful protest. I’ve watched people glue themselves to the road. I’ve seen people lie limp as the police dragged them away.

To know there are peaceful protesters who put their freedom on the line – who are ready to be maced in the face in America or spend the night in gaol to stand up against extinction. It makes me want to cry.

We have a principle that comes from amazing research from Erica Chenowith.

If you can mobilise 3.5% of the population for non-violent protest you can win, in fact you will win. That’s what happens in movements across time. Now that’s not passive support, that’s active, people ready to get out on the street, be prepared to strike from work sort of support.

All the massive changes in the world from women’s right to vote to the civil rights movement of the 60s took people lying down in the street putting their freedom on the line and millions marching.

We’ve got overwhelming support for real action on climate in Australia, at least when you ask people in a survey. But mobilising those people into marching or changing their vote? That’s much slower. The needle has flickered but it needs a huge jolt before things will change in this country.

Click here to find out more on Extinction Rebellion