Central Coast, NSW: A Guide To A Perfect Weekend On The Peninsula

We’re all guilty of getting mired down into the routine of the work week so we don’t blame anyone for occasionally forgetting that we all live in a veritable paradise.

Sydney itself is stunning but drive an hour in any direction and you’ll find charming small towns, wineries, epic mountain vistas and world-class beaches. Australia, we salute you.

And the Central Coast (more specifically the peninsula suburbs of Woy Woy, Patonga and Ettalong) is home to practically all of the above.

So in the interests of making your next weekend something a little extra special, here’s a guide to the perfect few days on the peninsula, just an hour from Sydney.

Clean coastal-chic furnishings meets sprawling bunches of multi-hued flowers, topped off with abundant clusters of citrus. Safe to say the team from The Boathouse Group know the recipe for making an eatery truly Instagram-worthy.

A post shared by The Boathouse Hotel Patonga (@theboathousehotelpatonga) on Dec 26, 2018 at 12:32pm PST

The Boathouse Patonga is the sixth addition to their ever-growing collection of cool cafes, Dare we say, it’s by far the most beautiful when you add in the 30 minute ferry ride from Palm Beach.

If you’re a local though you’ll have fun winding your way through the thick brush of Brisbane Waters National Park to get here, at times taking things VERY slowly down the cliffs along Patonga Drive.

Eventually the road opens up to an oasis of calm waters, beach shacks (and million-dollar hideaways), with The Boathouse Patonga acting as the rendezvous point for those in-the-know about this pristine part of the world.

There are no bookings here, which adds to the relaxed atmosphere although it does make competition for good tables fierce. We recommend you designate a person for ordering, one for drinks and one to guard the seats.

Also, if you’re wondering where to wear all your best white linen outfits, this place is it. 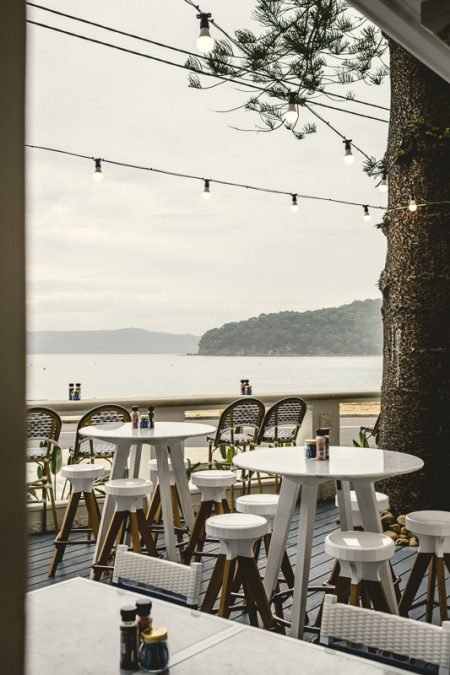 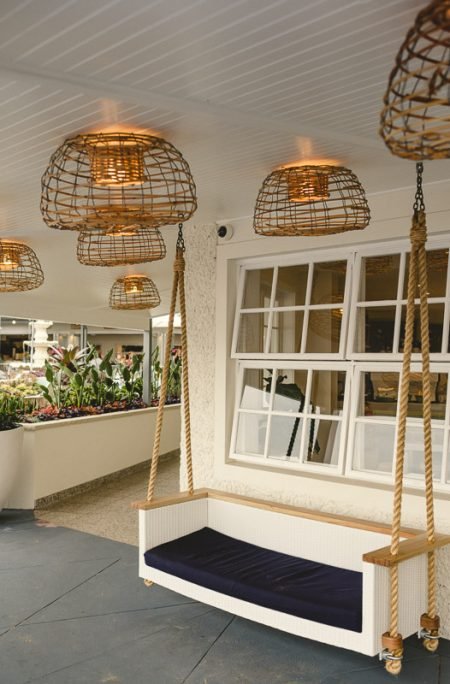 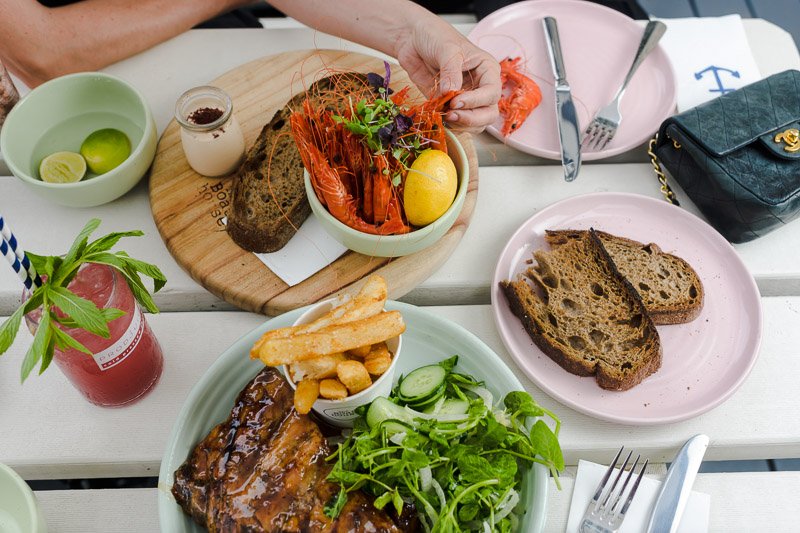 There’s no shortage of incredible cafes across the coast, however what sets Coast 175 apart is their ambitious approach to their menu. Everything is either made in-house or sourced from a gourmet market. It’s where you can tuck into freshly shucked local oysters or mussels steamed in chilli broth, or hit the classic Aussie cafe staples of corn fritters or avocado on toast. The emphasis here is on ultimate quality.

And Ettalong—what a charmer. As soon as you drive into the main street you feel like you’re venturing back in time to the humble Australian beach towns of yore.

Explore closer though and you’ll find that this place isn’t without its share of sophisticated eateries, it’s just that everything feels very understated and welcoming. 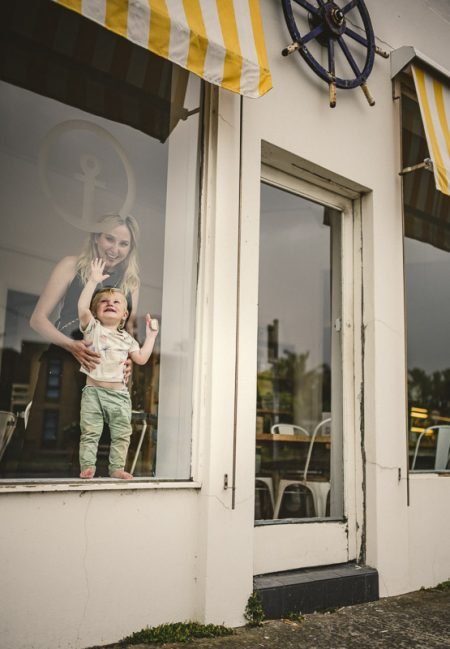 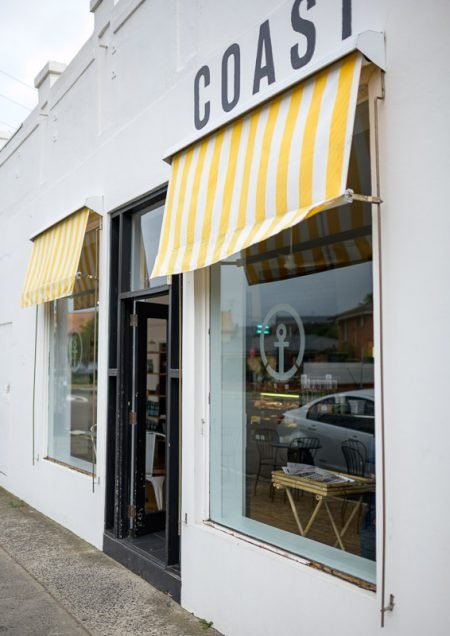 Mantra Ettalong stands out monolithically at the end of Ettalong esplanade, so from the outside it can feel a little out of place. However, within those high Sphinx-like walls you’ll find a surprisingly well-designed resort (and goes on record as one of our happiest stays thanks to its large rooms. Not luxury but just everything you need for a small family). 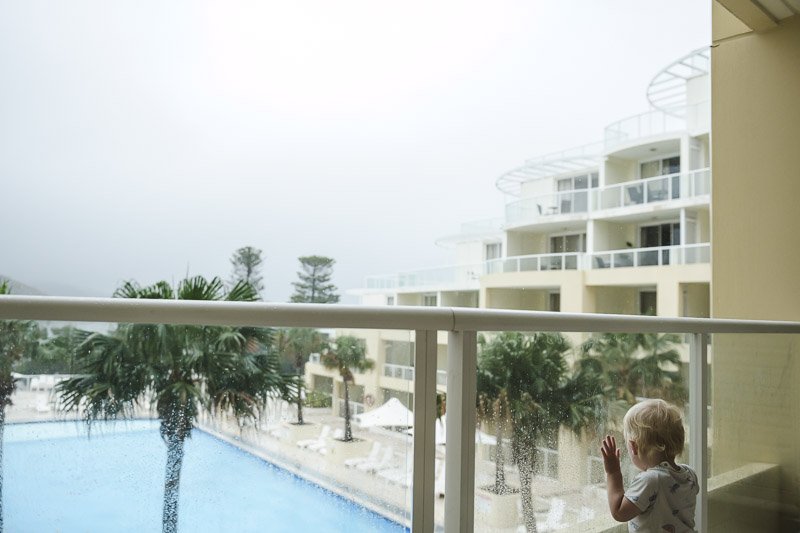 We say ‘surprising’ because as soon as you lay eyes on those views across the pool and the bay, you’ll see why it’s such a popular place to hide away on a long weekend. Nab yourself a bottle of vino, sit on the balcony and enjoy the sunset over the calm waters.

Tropicana is a pizza parlour by name but oh so much more than that if you’re a Woy Woy local. Home to the official Woy Woy Flea Markets, the little enclave that Tropicana calls home has become a bonafide community hotspot for the growing number of trendsetters moving here from Sydney.

As soon as you enter this den of dough you’ll understand why.

Mix a little Blue Hawaii meets Twin Peaks meets Cocktail and you might come close to the vibe here.

This is all artfully balanced by design maven and Tropicana owner, Cate Stewart, who also heads up agency Stuart + Highfield. 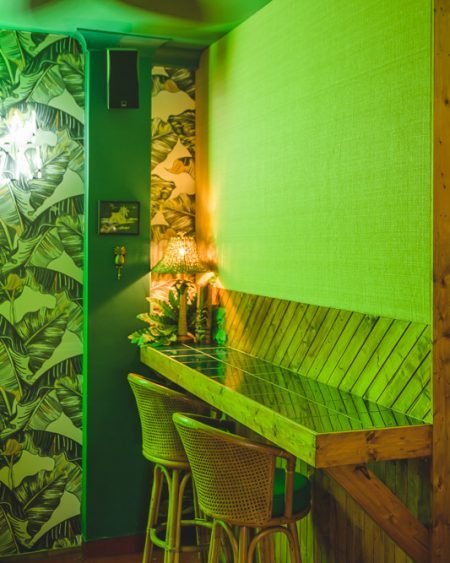 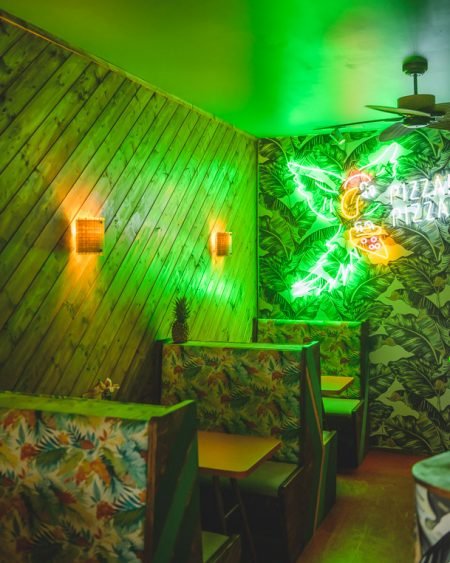 Fudge Monkey is so conveniently placed next door to Tropicana Pizza that it’s practically a full-blown diet destroying conspiracy.

This might be a vegan dessert bar but don’t let that scare dairy-lovers off. Owners Ganesh Crumlin and Angie O’Sullivan are more like scientists than chefs in the way that they fanatically challenge themselves to make their frosting and fudge taste better than the ‘real’ thing.

And we can honestly confirm that the Fudge Monkey ‘Cake Cups’ are the first time we’ve devoured a chocolate gateau and not felt so bloated we wanted to sleep for days afterwards. The cup it came in? Also biodegradable.

Fudge Monkey is feel-good food any way you look at it. 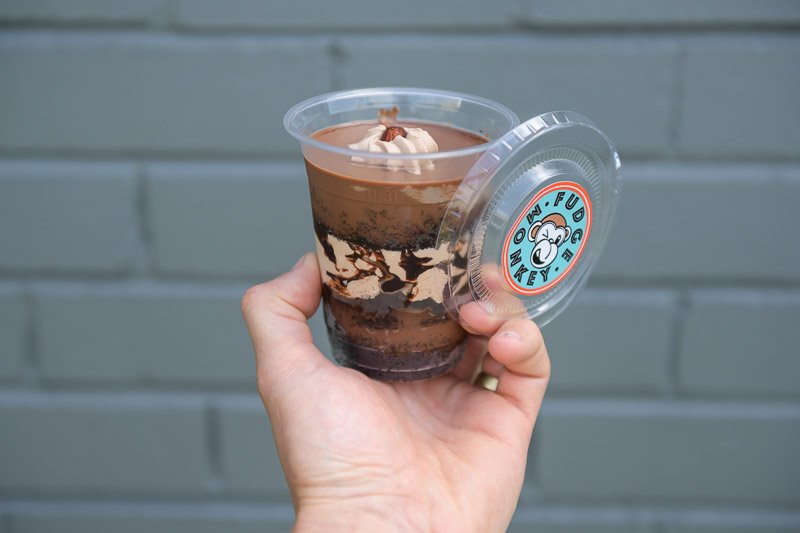 Wake up to the sun streaming into your room and gird your belly for another round of the Central Coast’s greatest foodie hits, starting with Lords of Pour. 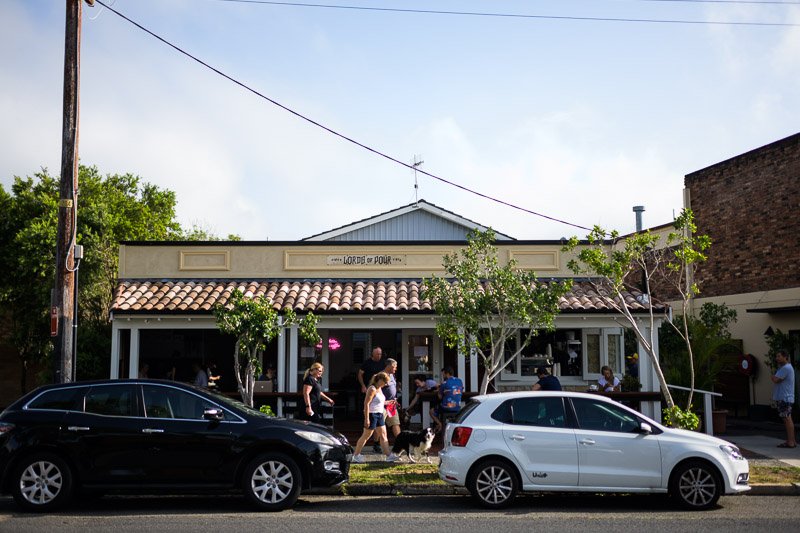 With a name like that you might expect a bit of an attitude, the good news is ‘Lords’ is a cafe with a hip Byron Bay look but that friendly Ettalong feel you’re probably (very quickly) growing accustomed to.

Whether you’re a vegan, a glutton or an austere eater, make sure you wrap your mouth around one of their ‘Bae Lyf’ burgers. They have one to suit any diet. See below for why…

Tiki La La is so artfully curated it’d be a crime to simply call it a ‘second-hand’ store.

That giant wicker palm tree in the corner? Our new favourite piece of art. Okay, it’s so special it’s not for sale but we’re working on them…

This is where you should take anyone who utters a disparaging word about the Central Coast’s culinary options. Not just because the kitchen is helmed by former Longrain chef Matty Bennett, serving up some of the most delicious vietnamese-thai fusion this side of South-East Asia.

Or because the venue’s co-founder is restaurateur and media maven Rupert Noffs, who manages to make every guest feel as welcome as a celebrity.

Or simply because The Lucky Bee is the Australian version of the pair’s uber successful New York eatery and manages to marry cool big-city energy with the beautiful scenery of the Woy Woy waterways.

Those are all great reasons. But bundle them all together and throw their spicy Thai chilli and honey ‘You Like It Hot’ cocktail into the mix and you’ve got yourself a singular excuse to take a train from Sydney to get here (don’t drive, you’ll thank us later). 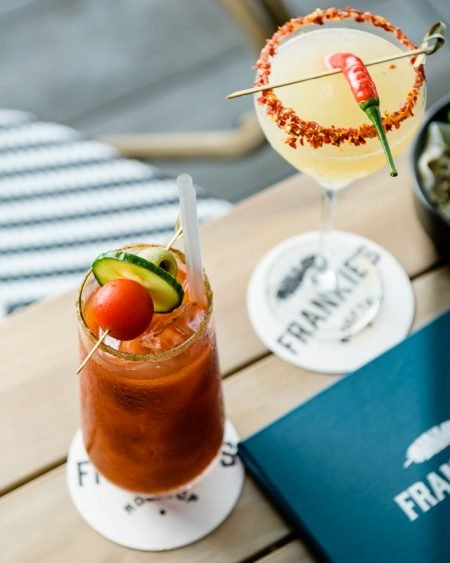 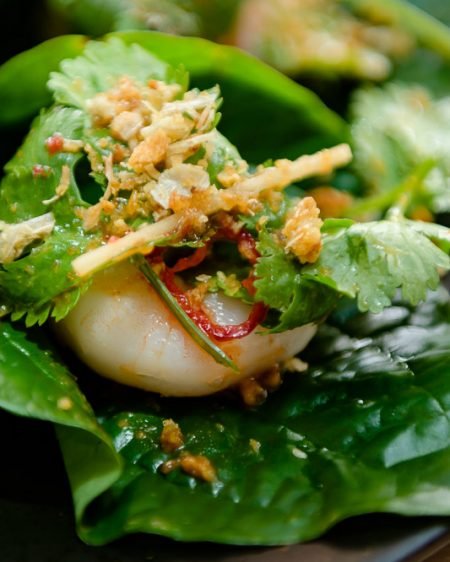 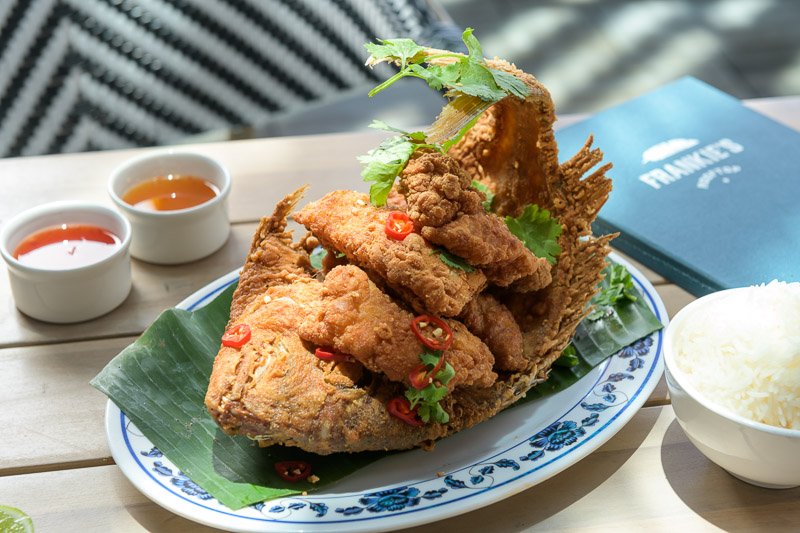 8:30am Breakfast: The Box On The Water
@thebox_ettalong
Ettalong Beach Waterfront Reserve, The Esplanade, Ettalong, NSW 2257

No doubt you’re nursing a little hangover from your afternoon’s indulgence so we promise you won’t need to walk any further than across the road to The Box On The Water.

Named after its panoramic aspect across Broken Bay to Box Head, it’s the best place to fuel up, don your favourite sunnies and people watch. 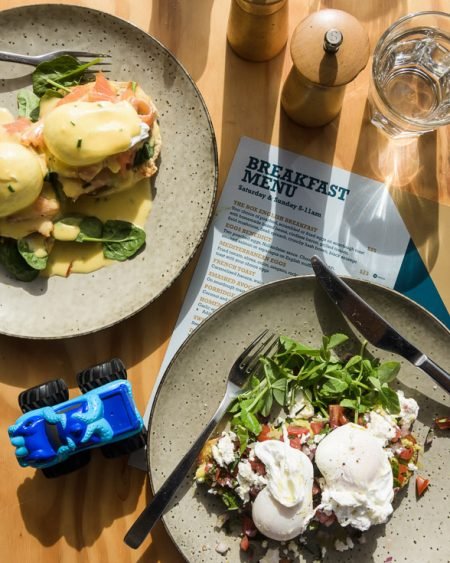 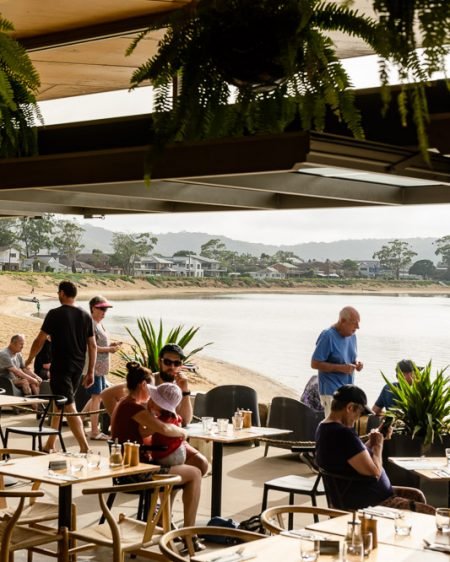 There are two options here for foodies, a casual takeaway on one side serving all-day breakfast rolls, fish and chips, oysters. Essentially everything you could imagine a bonafide Aussie kiosk could provide. On the other? A sleek architecturally designed sit-down restaurant and bar, offering contemporary Australian cuisine with absolutely priceless views. 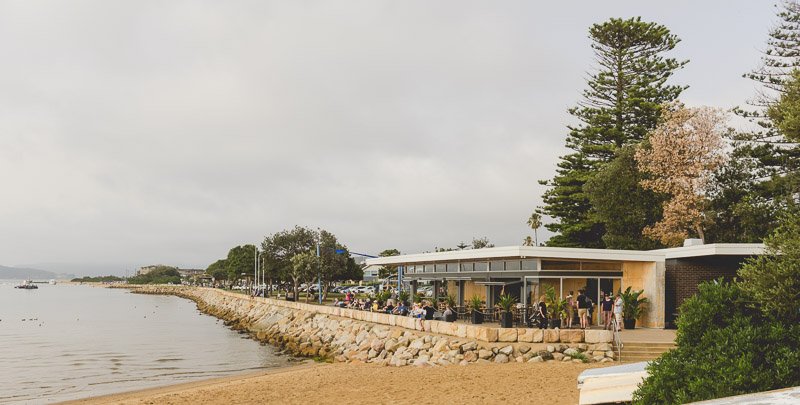 They say the best way to banish a hangover is a little exercise so why not break a sweat over some of Australia’s most picturesque scenery.

Bouddi National Park is full of incredible hike options ranging from cool rainforest strolls to extraordinary sweeps along the rugged coastline. A great entry-level trek is the Coastal Walk from Putty Beach, which ranges from an easy 1.5km through to an epic 8km five hour stretch of seascape.

The last stop on this tour is also the most romantic. As the name says, Woy Woy Fisherman’s Wharf restaurant is tucked behind an actual working wharf, with all the action of fisherman lugging boxes of fresh catch that goes along with it.

However, as soon as you step into the wide glass-encased dining room it’s like taking a visual Valium. The calm waterways flow past diners tucking down on whole szechuan salt and pepper snapper, while friendly Pelicans keep an eye out for any errant crumbs.

Absolutely one of the most rewarding and quintessentially Woy Woy experiences you’ll have while in the area and the perfect way to relax before getting back to the office. 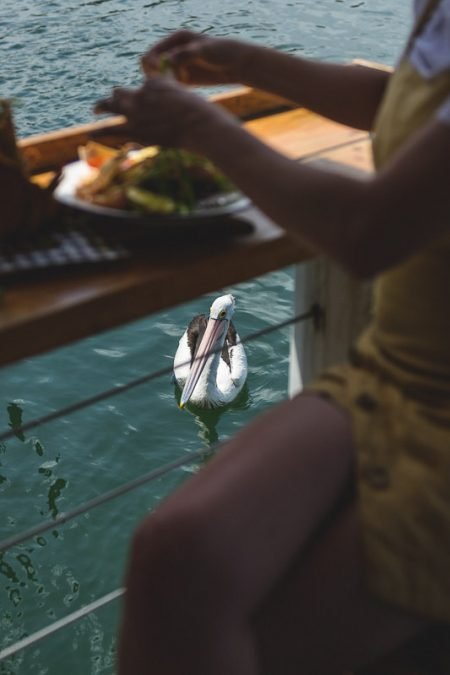 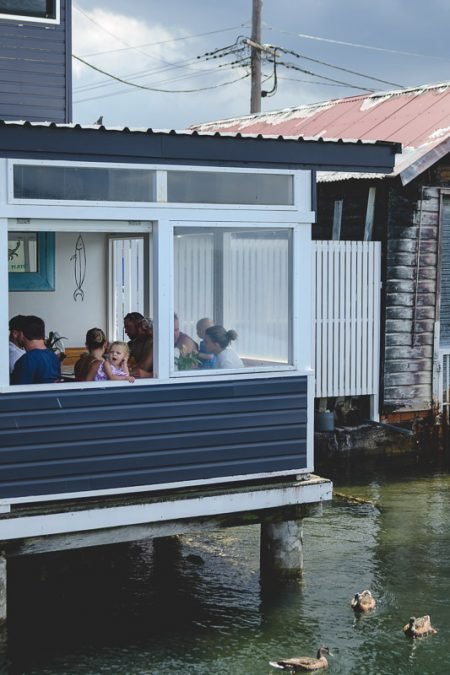 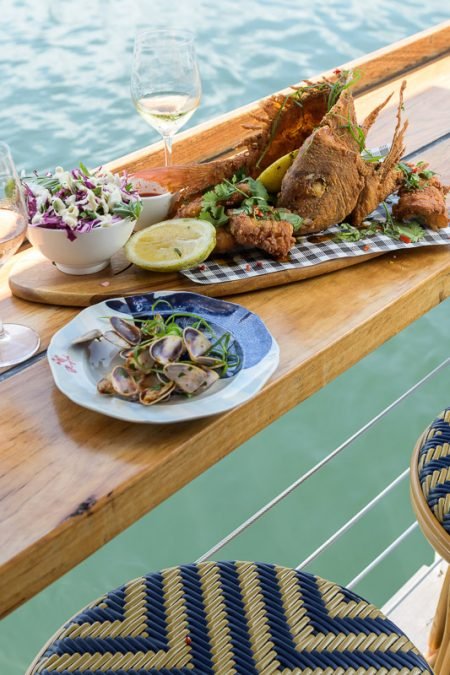 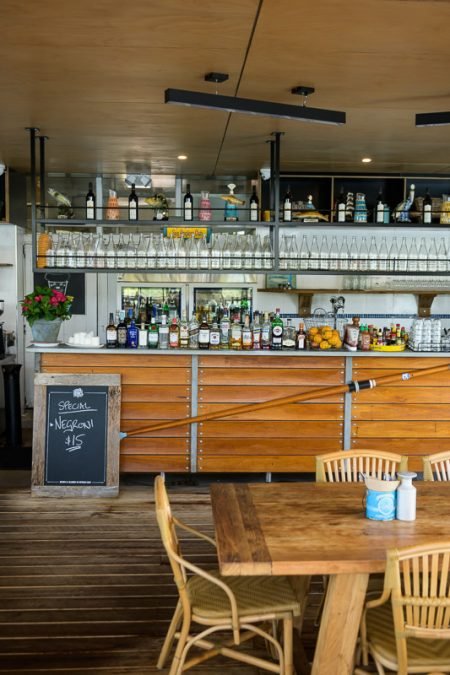 TIP:
On the way out you might be lucky enough to catch one of the daily Pelican feedings, which not only draws human crowds but families of birds that have been calling this little hideaway home for decades. 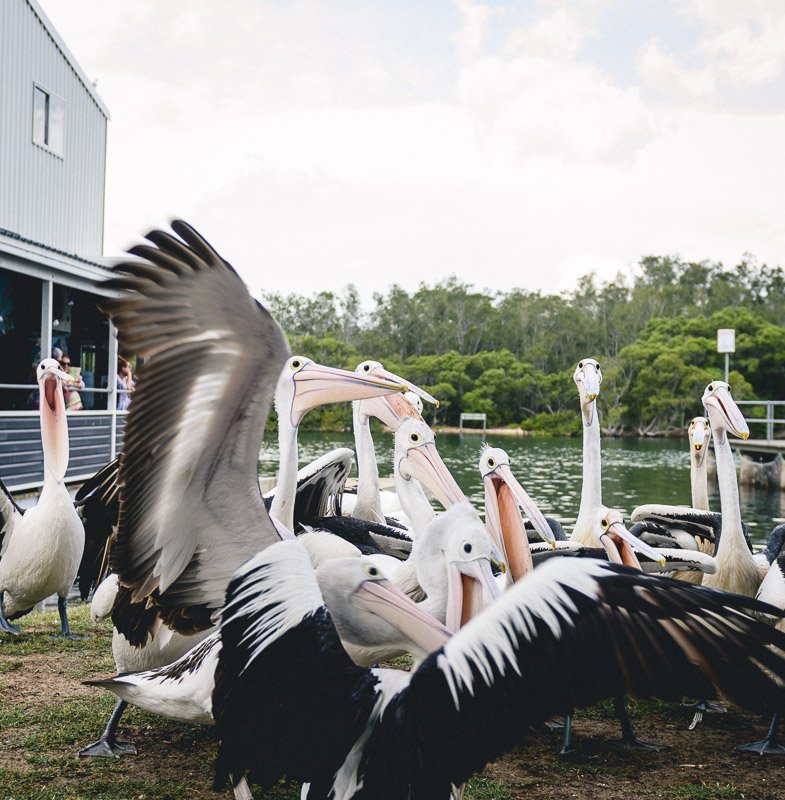 READ MORE
We’re all kicking around on the same court. 🌏

"The harsh lessons of the virus are that money and

"I think documenting darkness provides a sense of

"If you're not embarrassed by who you were last ye