As most businesses have a lull period as we countdown to the New Year, it’s a pretty good time to squeeze in a wintry adventure. The good news? Our festive forecast says you don’t have to fork out your life savings to get there — just maybe sacrifice a few Christmas presents.

Here’s our list of charming snowy destinations to check out next time Santa pays his annual visit.

Folklore has it that the world’s first Christmas tree was erected in Tallinn in 1441. Today, the tradition carries on and a towering evergreen fir-tree is erected in the Medieval town centre each year, while Santa and his reindeers do the rounds around the square.

So what if Cologne debuted its first Christmas party some 436 years after the first German city to do so? What it lacked in punctuality, it’s made up in size.

The city now boasts at least eight Christmas markets, from the famed market under the Cologne Cathedral to the nautical-themed Harbour Market along the River Rhine and the lesser-known Gay and Lesbian Market where you can bite into glittery penis-shaped waffles.

One of the top places to catch the Northern Lights, Tromsø offers a delightful surprise during Yuletide season. Here, festive red and greens of the Aurora Borealis dance across the night sky, spreading the Christmas cheer. Down below, dogsledding, skiing and snowman-building are all snow activities to embrace.

While you might not think of China when you think of a white Christmas, think again. Harbin in China’s coldest and northernmost province is the world’s largest ice sculpture festival.

This French Canadian city is already a stand-out destination due to its magical old town, but it truly comes alive at Christmas. At Old Quebec’s picturesque Christmas Village, catch an exposition of nativity scenes from around the world, and the traditional German market. Check yourself into Hôtel de Glace ice hotel for a stay like no other. 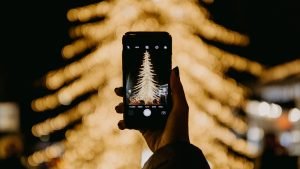 Turns Out You Can Rent An Entire Medieval Town In Tuscany And It's Only $30,000 Per Night