MEET ARIC S. QUEEN: 10 THINGS YOU LEARN WHEN YOU DECIDE TO QUIT THE REAL WORLD, BUY A BOAT & CIRCUMNAVIGATE THE GLOBE 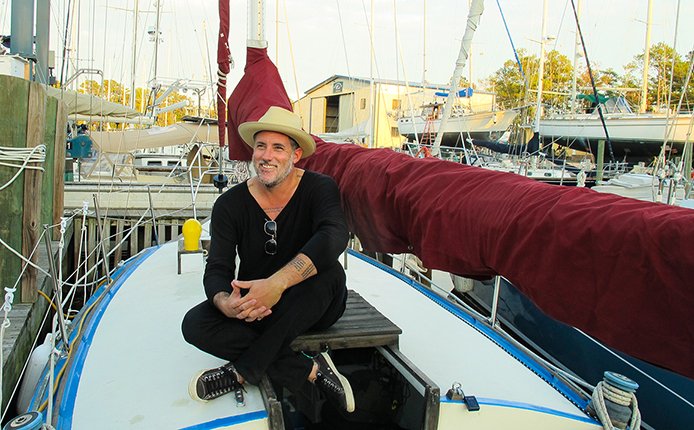 We talked to Aric S. Queen. He is actually doing it.

At some point you’ve opened your inbox, noticed the slew of Unread emails with ‘urgent’ flags and softly whispered to yourself, “screw it”. Only to ponder just how difficult it would be to sell everything, buy a boat and sail to the Maldives or somewhere you can while away the rest of your days spearfishing Box Fish for dinner and wearing shark tooth necklaces.

Yes, packing up and leaving the corporate life behind is one of humanity’s universal cravings. But want to know what it truly takes to haul anchor and GTFO for real?

Meet our new friend and your future hero Aric S. Queen. Also known as The Personification of Your Escapist Fantasies.

He’s a former TV and radio presenter, author, lead singer in a Prince cover band. Now, officially, he is the “CEO of a floating lemonade stand”.

Having bought a dilapidated yacht that he’s been furiously restoring to a respectable seafaring level, Aric has been documenting the journey from land lover to world adventurer for Lonely Planet (which is where we discovered him).

It’s a trip that will see him circumnavigate the globe from North Carolina to Florida, crossing over to the Bahamas, on to Havana, New Zealand, Indonesia over the span of a few years. Alone, and funding himself by selling lemonade.

From the highs of a dream realised to the devastating lows of floods and fires, Aric is showing the world the realities of, well, leaving reality behind.

Because all sailors emanate a certain world-weary knowledge and romance about them, we wanted to get closer to this seafaring adventurer. Here are some of the golden truthbombs he recounted…

A sailor is not born. He/she is made from years of eclectic life (and job) experience.

“I started as a radio presenter at 17 years old, did that for about 5 years but left (because they asked me to). From there I sold everything and bought a one-way ticket to Europe.

Since then I’ve done everything from washing dishes in a small English pub, to writing a book, to telemarketing to running a radio station in China, sang in a Prince cover band, to a stint as a door-to-door copy paper salesman.”

You don’t just decide to sail off on a whim.

“A culmination of a lot of things lead to me being here. Therapists and ex-girlfriends would suggest a fear of commitment but about 2 years back I took a bicycle and a tent and rode around Europe and North Africa. It was 9 months, 12,000 miles, outdoor every day and it was the most amazing adventure.

The only drawback was having to set up that little campsite every night. I thought ‘how can I still have these adventures without sleeping in somebody’s yard?’ and that’s when I seriously began considering the whole move onto a sailboat’ idea.”

“When I told my family what I was going to do they generally reacted in the same way they usually do: “Great, he’s going to ask us for money again.” [laughs].

But seriously, you know, when I first left for Europe, my dad left a note in my backpack that said “Bud – remember the 4 L’s: Live, Love, Learn, and Leave a legacy.” Basically saying “have your adventures, but do something with it.”

I come from the strongest family you can ever imagine, which makes the rest of this stuff all a bonus. As for my friends – my tribe – you’ll never meet a stronger, more supportive cast. You’d think that they’d all tire of my great big ideas, but so far they haven’t.”

Giving up possessions is really hard

“Oh, I’d love to be one of those guys who’s like “everything I have fits into this one suitcase.”

I love stuff. I love things. I love gadgets and hats and bags. Everything.

Fortunately, I don’t have the room for much. However, the hardest non-tangible thing to abandon, aside from being close to my niece and nephew, was a social circle. I miss having friends to see at the pub. I miss weekly dinner parties. I miss hungover Sunday morning breakfasts.”

You will be challenged (like, a fire will ignite on your boat). You can only keep going.

“It’s funny you ask me about challenges and whether I questioned if I should keep going because – as I sit here and write this – I realised that not once have I ever thought “am I supposed to be doing this?” I am. Most certainly I am.

No, seriously, “there’s a reason there are no happy boat movies.”

“Every sailor has a copy of ‘Captain Ron’ on their boat, because it really is the only upbeat film about sailing.

But honestly, as far as day-to-day challenges, the hardest part is the vocabulary. Things like, this isn’t a rope [even though it is], it’s a ‘line’. Or a that is a ‘sheet’, or a ‘halyard’. But not like a bed sheet. And ‘tack’ has three meanings. Oh yeah, that spinning thing with wheels on it? It’s called a ‘block’. Whatever.“

You’ll look forward to some ports more than others

1. Haiti: I’ve been obsessed with this place since devouring ‘The Serpent and the Rainbow’.
2. New Zealand: Been trying to get there for years. Shame about the accents.
3. Sri Lanka: Our secret? I love playing cricket and I’m going to spend a month there just doing that and snacking daily on coconut roti.
4. Southampton, UK: This place will always have a special place in my heart because it’s where I lived for a few weeks when I left the US for the first time, so it’d be a nice tribute.
5. Senegal: The jazz coming out of here rivals that of Ethiopia and I’d love to shoot an entire documentary on it.

“What will I be doing for those long stretches at sea? On the record: I’ll be reading a lot and appreciating the blessings I’ve been given to be in this position. Off the record? I’ll most likely be missing those big gulf oysters down in New Orleans and thinking up witty captions for my Instagram posts.

I am, however, fascinated as to where my mind will go on those long trips, you know? The question a lot of people ask is, “don’t you want someone to go with you?” Absolutely not.

Think about it, 20-30 days at sea with just my own thoughts is too delicious to pass up. Maybe I’ll go mad. Maybe I won’t. Maybe I’ll realize some shit. Maybe I’ll be bored. Who knows? But I can’t wait.”

“You want to know my lemonade recipe? Give away the secret that’s going to make me hundreds of dollars!? Nice try. I’ll give you one key ingredient: Rosemary.”

COTW: What are 5 things you’ve learned & know to be true?

“Only 5? As you can see from the 52 tattoos, I might have trouble choosing a fave, but here are a few that immediately come to mind:

“This was a piece of advice given to me by an old sailor here when he saw me start to get overwhelmed with everything. Said it was the ‘key to sailing and to life’.”

“I saw the inimitable Yugoslavian composer Goran Bregovic at Carnegie Hall in new york many years ago and he used this phrase to describe how the best things in the world shouldn’t be had by just the privileged. Kind of a Balkan take on the old saying ‘rich people are just poor people with money’.”

“When musician Warren Zevon found out he had weeks to live, he appeared on a talk show and when asked ‘what advice did he have for living?’ and he said this. I loved that.”

“This quote kind of ties in with the question you had re: knuckle down-ing:

6. “Also my favourite quote also comes from my most favorite story of all time, ‘Confessions of a Dangerous Mind’ by Chuck Barris.

‘It was the world series. Philadelphia versus Kansas city. Tug Mcgraw of the Phillies was pitching. It was the fifth game of the series, the bottom of the ninth, with the Kansas city Royals behind four to three. The royals had the bases loaded with two out. Kansas city had just won two straight games to tie the series, and now they had a chance to win a third and go ahead of Philadelphia three games to two. The game was being played in Kansas city. The ball park was packed. The crowd of over fifty thousand frantic Kansas city fans were on their feet, yelling their heads off. It was bedlam. In the middle of all that commotion, Bob Boone, the Phillies’ catcher, asked the umpire for a time out and walked to the pitcher’s mound. He said something to Mcgraw, turned, and walked back to home plate. You know what he said? He said, “isn’t this exciting?’

What a wonderful thing to be able to say.”

COTW: PS: where can we buy your calendar?

“I actually teamed up with my favourite charity in Tulsa (my hometown) to buy sleeping bags for those that aren’t lucky enough to have a roof.

All you need to know is below.”

Are you utterly obsessed with The Maritime Lemonade Stand yet?

You can keep track of all the episodes here at Lonely Planet’s Youtube.

5 Free & Easy Things You Can Do To Help The Planet