Results Are In! These are Australia's Top Restaurants For 2019.

This year’s edition of the book that foodies around the country wait the whole year for — and those in the kitchen outright fear — is here.

Do you live in Australia? Do you eat out? Then, you’ll know the Good Food Guide, is placed as Australia’s restaurant bible, and why everyone’s so excited about the release of its latest edition.

In the 39th edition, 59 independent food reviewers and trusted restaurant critics dined at more than 500 restaurants from Darwin, Hobart, Adelaide, Sydney, Melbourne, Perth, Brisbane and Canberra, with 264 of these receiving hat status — Australia’s version of a Michelin star.

So what are the top restaurants in the country? Let’s hear it for this years. 2019 Good Food Guide Award winners (and if you’re fortunate enough to snare yourself a much-coveted table please invite us).

With the name Orana, which translates to “welcome” in some Aboriginal dialects, chef and owner Jock Zonfrillo creates an inviting space that celebrates our sunburnt country and creates a unique culinary philosophy. We reckon it’s worth the trip to South Australia — no matter the cost.

While still a newcomer, Laura is no stranger to praise. Before receiving two hats in the 2019 Good Food Guide, it took out the New Restaurant of the Year 2018 in the Gourmet Traveller Restaurants Awards, and Best Regional Restaurant in Time Out Melbourne Awards 2018. Its set menu tells the story of its beautiful surroundings in Mornington Peninsula and takes diners of a journey of the wine region throughout the seasons.

Three-star Guide staple, the recently renovated Quay is back and better than before. While its signature snow egg dessert has since been retired, its iconic views that look out Sydney Opera House are still there and serve as inspiration as Chef Peter Gilmore pushes on to continue to evolve the spirit of Quay.

Located in unassuming Birregurra, a country town 90-minutes from Melbourne and the population of 688 people, Brae isn’t really what you’d expect to find one of the best restaurants in the country. But then again, Anthony Bourdain used to rave about its chef Dan Hunter, so this win shouldn’t really come as a surprise to those who religiously watch Parts Unknown.

Little sister of Vue du Monde, each dish at Iki Jime celebrates the Australian produce and the relationship between topography and seasonality.One of the people behind its success its junior sous chef, Jodie Odrowaz who started off at Vue du Monde as a waitress before begging Shannon Bennett for an internship in kitchen — and if you’ve seen him on Masterchef you know that takes balls.

Most known for its unmatched view of Brisbane’s Story Bridge, we always knew about the calibre of the food at Otto but no one told us about their stellar wine list. That is until now.

Regional Wine List of the Year: Wickens at the Royal Mail, Victoria

With a cellar that holds 28,000 bottles of wine, including the largest private collection of Bordeaux and Burgundy in the Southern Hemisphere, the sommelier team at Wickens at the Royal Mail are bound to know their stuff. And they’ve proved it by taking out this award. Tours of their cellar start at $25 per person. Race you there!

He’s the guy that you wish you had by your side when you get asked what kind of wine you like, but unfortunately for you, you’ll have to head to the Melbourne neighbourhood of Carlton to hear what notes you like. I bet we really have to twist your arm to make that happen — not.

Showing off Sydney to visitors or simply want a night to remember and for everything not to go wrong? Momofuku restaurants around the world are famed for fusing street eats with fine techniques and ingredients and now we can look forward to being served on like a queen.

Venetian flavours aren’t the only thing that entice diners to Stefano’s Cantina in Mildura. It’s the charming Stefano who was awarded for his outstanding long-term contribution to the Australian food industry.

This Sydney institution has seen its fair share of good times and we think it’s due to its extensive wine list that boasts more than 300 local and international rarities, with a real and natural wine focus. No hangovers? We’re in. 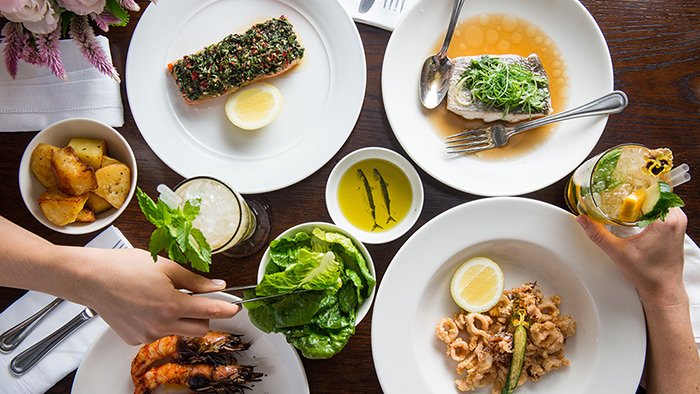